David Oscar Markus is one of few lawyers that can do it all.  He actually tries cases and argues appeals all around the country. He teaches at the University of Miami School of Law and also to lawyers at legal education events.  He runs the well-known Southern District of Florida blog.  He also hosts a successful podcast, For the Defense.  And he frequently advocates for criminal justice reform in opinion pieces. 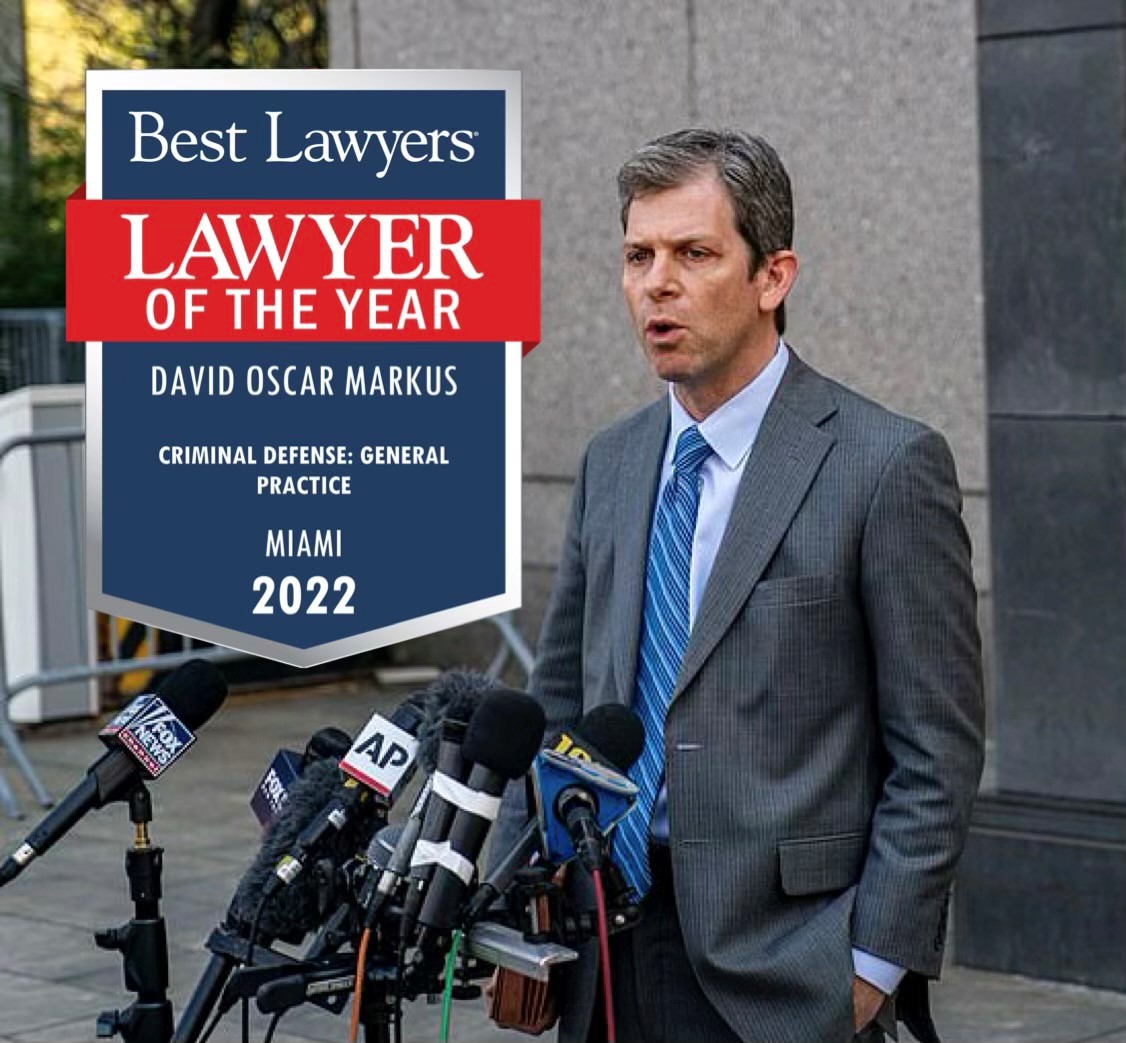 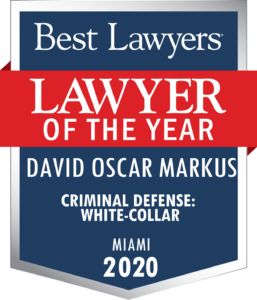 In one trial victory, David not only beat all 141 counts in federal court for a doctor, but then won attorneys’ fees and costs of over $600,000 for his client in a first-of-its-kind victory. Based on that case, he was awarded the highest honor — the Rodney Thaxton “against all odds” award — by the Florida Association of Criminal Defense Lawyers. Although the 11th Circuit reversed the fee award in a number of controversial opinions, the court referred to Markus as an “elite” and “superb” attorney. (See page 9 of the opinion here). In another case, David challenged the way the federal court system in Miami selected jurors (alphabetically by last name) and won, which changed the jury selection process in the District (click here). After obtaining a fair jury, Markus’ client was found not guilty.  He never stops fighting for his clients. 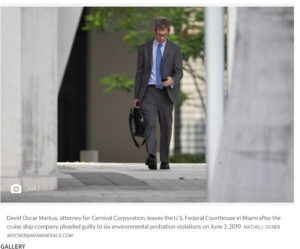 David Oscar Markus leaving the Federal Courthouse in Miami after a hearing in which he represented Carnival Corporation.

Based on this type of creative and unique lawyering, in 2010, David was one of eight finalists in the country for best white-collar criminal lawyer in the country by Chambers & Partners, which quoted market sources saying that David is “the whole package,” and “a creative, courageous and tenacious courtroom advocate.” And he was named to that very prestigious short list of 8 best white-collar criminal defense lawyers again in 2011 (he was the only lawyer listed who was not from a large firm). The 2012 Chambers said this: “David Markus received strong praise from peers and clients alike, who describe him as ‘a legal genius and brilliant strategist with a great demeanor.'” A recent Chambers & Partners described David as a “wickedly smart and a terrific trial lawyer. … Clients say that he is ‘thrilling’ to watch in court and that ‘his passion appreciation and enjoyment for his work are contagious.” And in 2014, that publication identified David as “one of the best trial lawyers around: very smart, highly respected and thoroughly prepared.”  In 2016, Chambers said: “David Markus is one of the most talented criminal defense lawyers in Florida. He has a wealth of litigation experience and is regularly sought after for his counsel in high-stakes tax and criminal antitrust cases. Sources also describe him as an ‘extremely creative thinker and a great oral advocate’ who gets ‘tremendous results.'”  Chambers has also explained: “David Markus is amazing, not only because of the strength and genius of his arguments and motions, but also because of his brilliant and astonishing performances during the hearings. Additionally, he radiates so much confidence, and that in itself soothes the usual anguish and anxiety that you endure during these types of situations. Last but not least, he is such a great human being.” In 2020, that publication said that David “is an exceptional trial lawyer,” “an incredible oral advocate” and that “he’s pretty fearless in terms of dealing with the government.”

Since 2010, David has been listed as one of the top 100 lawyers in Miami and in all of Florida by SuperLawyers. He is one of the few criminal defense lawyers to received such an honor.   He is frequently named as one of the top lawyers in the Best Lawyers in America, South Florida Legal Guide, Florida Trend Magazine, Chambers & Partners, and the South Florida Business Journal. He was one of 20 lawyers named a key partner by the South Florida Business Journal in 2011 and again in 2012. The Daily Business Review named him a finalist for Most Effective Lawyer in Criminal Justice (one of three lawyers in Miami) in 2006, 2009, 2011, 2012, and 2015. He won the award in 2018. The district judges in the Southern District of Florida presented him with the Eugene Spellman Criminal Justice Act Award in 2013.

While at Harvard, David argued in front of Supreme Court Justice Anthony Kennedy who named him best oralist. (The argument, which was carried on C-Span, can be viewed here. David’s argument begins at 57:42). David was mentored by Alan Dershowitz while in law school (click here for a picture of them together at Harvard). After graduating from Harvard, David served as law clerk to the Honorable Edward B. Davis, then-Chief United States District Judge, Southern District of Florida. Following his clerkship, David worked as an associate at the leading criminal defense firm in the country, Williams & Connolly in Washington, D.C., and then practiced as an Assistant Federal Public Defender in Miami. 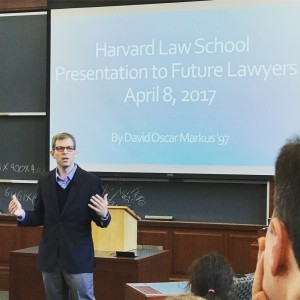 David is a past-president of the Florida Association of Criminal Defense Lawyers – Miami Chapter and past-president of the Federal Bar Association, South Florida Chapter, 2007-08. He served for ten years as the Southern District of Florida’s national representative for the Criminal Justice Act Panel, and is the vice-chair of the National Association of Criminal Defense Lawyer’s amicus committee. David also has co-authored the Fourth Amendment Forum, published in NACDL’s The Champion. He is frequently asked to serve on committees for the Southern District of Florida.

David frequently lectures on different aspects of the criminal trial and appeal. He currently teaches a White Collar Law seminar the the University of Miami School of Law and previously taught legal writing there. David also has taught Advanced Criminal Procedure and White Collar Law at Florida International University College of Law. He often speaks to other criminal defense lawyers on ethics and zealously representing criminal defendants charged with serious crimes. His lengthy list of lectures can be found on his resume.

David has also teamed with rakontur in the new podcast, For the Defense, which is about true criminal trial lawyers.  In the podcast, he interviews other well-known criminal defense lawyers about their most interesting trials.  You can listen to it here. 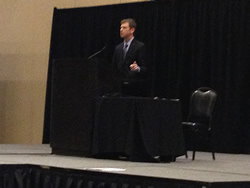 David speaking to criminal defense lawyers at NACDL’s annual conference about how to win “pill-mill” cases.

David is often quoted in publications around the country, including The Miami Herald, The Sun-Sentinel, The Palm Beach Post, the Daily Business Review, USA Today, The New York Times, The Wall Street Journal, The Boston Globe, Law.com, and CNN.com. He has written opinion pieces for numerous publications, and is the author of the popular Southern District of Florida blog, which has been described by the New Times as “the definitive source on South Florida’s federal court system.”  He recently wrote a chapter in a book for lawyers; his chapter was titled “Battling Goliath, Trying to Win in the Court of Appeals.”

David is a frequent opinion contributor, arguing for criminal justice reform and for individual rights.  He has written pieces in the Washington Post, USA Today, Miami Herald, New York Daily News, law.com Newsmax, and others.  In this recent op-ed, co-authored with Mona Markus, he explains how the government frequently and unjustly prosecutes doctors.  In another, he argues that cameras should be permitted in federal courtrooms as a check on prosecutors and judges.

He is also a regular contributor for The Hill:

Chauvin verdict: Don’t hate his lawyer
Social media is mightier than Gov. DeSantis’s guns
Bannon and Maxwell cases display DOJ press strategy chutzpah
Federal judge rightly upset over wrongful jailing of Michael Cohen
Cellphones haven’t stopped cops from lying — only courts can do that
Former prosecutors outraged at decision to dismiss the Flynn case should focus on the real problems
Lori Loughlin case should be dismissed if the prosecutors cheated
Let’s use Roger Stone’s case to fix our broken justice system
Michael Avenatti should not be in solitary confinement
We’re addicted to jail
Felicity Huffman’s 14-day sentence is unjust — because it’s too high
Justice Gorsuch channels his inner-Scalia, and that’s good for criminal defendants

Kim Kardashian is the hero that criminal justice reform needs
Federal prosecutors are trying to bully ‘Aunt Becky’ into pleading guilty
#MeToo has lost its way: In defense of Joe Biden
Barr and Rosenstein likely made correct legal decision on obstruction
Four years for Paul Manafort is the right sentence
A small next step for criminal justice reform: Fix good time credit
Paul Manafort should not be sentenced to 20 years in prison
OPR should investigate real prosecutorial misconduct, not Secretary of Labor Alex Acosta
Special counsel’s office wrong to arrest Roger Stone instead of letting him self-surrender
Absolutely nothing wrong with Manafort’s lawyers talking to Trump’s lawyers
Mueller should not get to decide whether Manafort is lying
Brett Kavanaugh would not have been treated fairly had he been a defendant
Should Kavanaugh be confirmed if we don’t know who is telling the truth
Five simple rules for judging Kavanaugh and his accusers
Kavanaugh won’t be charged

David is committed to zealously representing each and every one of his clients. He has built a reputation for winning the most difficult cases with creative strategies. David takes each case personally and does not like to lose.

You can email David Markus at dmarkus@markuslaw.com 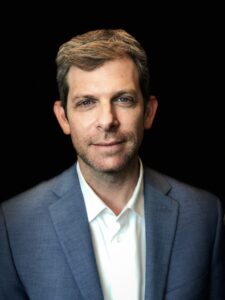